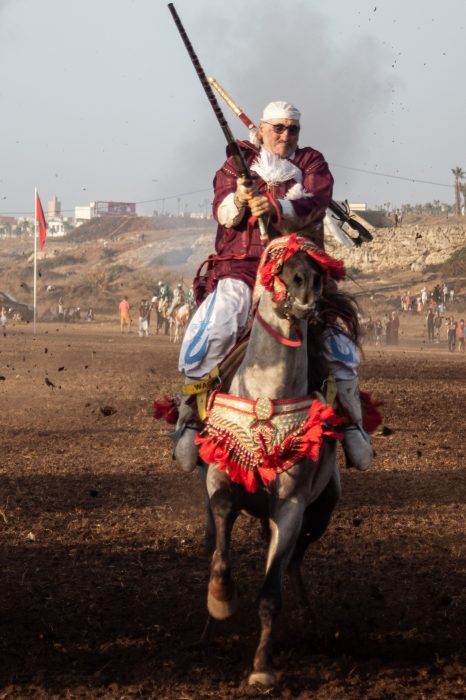 The art of “Fantasia” is one of the oldest and most ancient Moroccan arts that has been passed down from generation to generation for centuries, as Moroccans have always wanted to educate and train their children in horseback riding and fighting, which developed into shooting while galloping with horses, known as tabourida.

Many festivals are organized for this art, in which families and tribes compete to show the skills of their children, including the Mansouriya Festival for traditional horsemanship and Taburida, which is currently held in Mansouriya, south of the capital, Rabat, in its thirteenth session of its second edition.

The Mansouriya festival is one of the oldest and oldest equestrian festivals and tabourdeh of Morocco, as it is an ancient annual tradition dating back more than eighty years, and it was called the season of the good Wali Sidi Mohamed Al-Sharqi and Taburida Teams from different cities and regions of Moroccan fantasia have participated in it, while 19 teams of 19 participated in its current session A different destination city of the entire Kingdom of Morocco.

Al-Taburida festivals are distinguished by its rituals and atmosphere, while the teams and tribes compete wearing brightly colored traditional clothing, accompanied by swords and firearms, being an integral part of the general appearance of Faris al-Taburida, as well as participating in the acquisition of the strongest and finest types of horses that participate in the show.

The performance begins with the group advancing and greeting the spectators by raising the guns, then running quickly with horses and guns that are called “gunpowder” and from there came the name “tabourdeh”. The criterion of excellence between the teams is the tight organization in the group’s clothing and at the time of launching and hitting the gunpowder.The team continued to fire the powder at the same time as the most acclaimed.

A number of knights participating in the festival said that they worked in jobs and jobs that are completely removed from riding and horses. Some of them work in government jobs as accountants and engineers, including doctors and teachers, and some of them are immigrants in European countries and they spend thousands of dollars to complete this show.

Among them is Qarqur al-Khalil (43), a government employee, who told “Al-Arabi Al-Jadeed” that he loves the art of tabouridah that is passed on from generation to generation and taught from one generation to another.

What are the Moroccan cities where the art of Fantasia is held?

The inhabitants of the region of Moulay Yacoub lived for four days, from August 17 to August 21 this year, to the rhythm of the activities of the festival Tebourida organized by the Association Nasr for Borrowing, Culture and Development, which revived this culture and sports event aimed at protecting and preserving the Moroccan cultural heritage represented in Paying attention to the rebellion and restore respect for the heritage of the Persians and riding, which is one of the components of the authentic Moroccan identity and civilization, especially since the Ain Al Shaqaf The region with its tribes had done well and was present to defend the issues and the resistance of the nation against the colonialists, given that the taborida, or as it is called in Amazigh, “invades” the art The traditional Moroccan horsemanship, or “Taborida”, and its aesthetics of the decoration of the horse and the elegance of the knight, until the fifteenth century AD. As for the origin of the name, it is derived from the gunpowder fired by guns during the parade. The torrida is a ceremonial ritual as it appears now, but it was originally an equestrian and war ritual. And the power of the knights.

The most famous squadrons belonging to regions known for their close relationship with the Persians and their national and international presence in various forums of interest to the Persians participated in this festival, which coincides with the celebration by the Moroccan people of the anniversary of the King’s revolution. and the people and the glorious youth festival and the glorious milestones that they represent in the modern history of Morocco
Through this festival, which seeks to perpetuate the tradition of interest in horseback riding that the ancestors embraced, the organizers bet on the interest in horseback riding and riding, which was a prominent feature bearing the traits of identity and authentic civilization, the Arab horse. as a core, an indication of the investment of cultural heritage to serve the development in the region and the region and contribute to the advancement of the sector Al-Falahi, as well as motivate the youth of the region to inherit this interest, to preserve it, and ensure its continuity.

The audience, which made the pilgrimage of the tribes fond of Persians and raised them on the site of this regional match, witnessed a series of performances of the art of “taborida” and authentic local heritage, with the participation of equestrian teams from the region. level, which were accompanied by performances of songs, moans and cries, indicating heroic positions.

This session, which was held in the area of Ras al-Ma’a affiliated with the Trabia community of Ain al-Shaqaf, as Hassan Belmodh, a parliamentary adviser to the constituency of Moulay Yacoub confirmed to the newspaper, to document the cultural heritage and contribute to the preservation of local heritage and experiences.