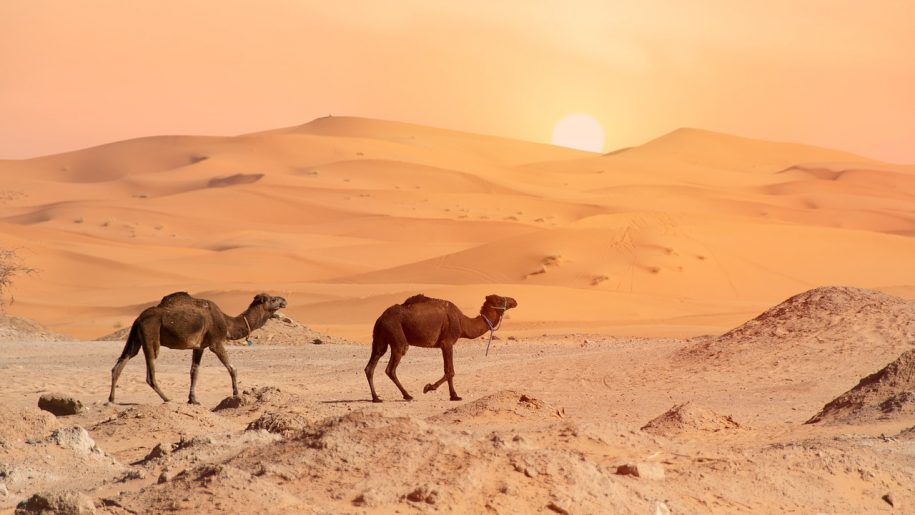 Morocco attractions is amazing , created at the crossroads of many cultures. Berbers, Carthaginians, Mediter ranean pirates, sultans and great viziers had a hand in its emergence. The mighty Atlas Mountains, sand dunes and picturesque oases create a unique landscape of the country.

The cities of Morocco are buzzing with life nonstop. At its center are the eastern bazaars. A divine mixture of spices and cloves mingle with cumin and mint with pepper. Vocal traders proclaim their wares in every language of the world. Shoppers haggle over the price of their favorite items, and then quietly smoke hookah in the many cafes. And above all this scenery stretches the deep starry sky of Morocco attractions.

What to see Morocco attractions

There are not many countries in the world that can boast such cultural diversity as Morocco. This African country is more like a Middle Eastern country, which only adds to its charm and fascination. Bazaars, oases, palaces, beautiful mosques and picturesque waterfalls await in Morocco attractions.

This is one of the oldest cities in the country, which has more than a thousand years of history. This place is known as a center of crafts, where they produce fabrics, ceramics, leather goods, there is a pottery production. It is easy to get lost in the maze of narrow streets of Fez. Stairs, alleys, passages, squares, mosques and madrassas are woven into a tangle of streets. And in the midst of all this maze are elegant boulevards, on which French engineers and architects worked.

For many years, Marrakech competed with Fez for the right to be called the capital of the state. This struggle was won by one or the other city. Marrakech welcomes travelers with shades of ochre and beige stone under the sun and the calls of the muezzin to prayer. In the center of the city stretches the largest square in all of Morocco – Jamaa el-Fna. The best time to visit the square is in the evening. When the sun goes down on the area unfolds a giant bazaar, cafes open, street artists, acrobats, dancers, drummers and magicians begin their work. A show with a snake spell gathers a huge crowd of spectators. Meanwhile, there are other interesting attractions in the city. Here you can see the ruins of the castle-palace of Qasr al-Badi, the mausoleum of the Saadite dynasty and the famous palm groves of Marrakech.

The city of Casablanca is known as the namesake of the Hollywood romantic film, which was directed by Michael Curtis. Since the film’s release in 1942, Casablanca has remained the largest port city in Morocco. It is a giant transport artery of North Africa: it connects railroad hubs, highways, airports and, of course, maritime routes. The sights worth visiting in Casablanca include the Hassan II mosque, the Habbous quarter with its palaces and mosques, the Morocco Mall, which is the second largest in Africa.

The historic city of Meknes was a fusion of two cultures: Spanish and Moorish. Under Ismael ibn Sherif the city became the capital of the state. This period has preserved the majestic city gates and the magnificent royal palace. The king’s stables for 12,000 horses is one of the largest in the world. Among the sights of Meknes are also a giant granary, the building of the royal prison, and magnificent gardens. And in the vicinity of the city there are ancient Roman ruins.

The modern capital of Morocco stretches on the Atlantic coast. Blue-and-white houses climb the slope in a running labyrinth. The city boasts excellent museums. Worth nothing but the National Archaeological Museum and the Museum of Modern Art. In the museum you can see a traditional Moorish dwelling, admire the Andalusian jewelry, see a collection of medieval weapons. War trophies from Moroccan pirates are also kept here. Popular attractions in Rabat include the Royal Palace, the Mausoleum, the Shell Fortress

Tangier is strategically located, which has led to constant military clashes. The Carthaginians, Romans, Byzantines, Greeks, Berbers, Spaniards, Portuguese, Vandals, and English had their time here. Each of these nations has left its mark on the history of the city. The historic center falls on the Medina with the fortress of the Kasbah. But tourists come to Tangier not for the medieval buildings, but for the longest line of beaches (over 40 km.). According to legend, the ancient Greek hero Hercules spent the night in one of the caves below Tangier. Today there are excursions to the Grottoes of Hercules.

It is a small city on the Atlantic coast that preserves its Portuguese heritage. The impregnable walls of the fortress of Mazagan rise straight out of the water. Narrow embrasures, cannon emplacements, a crenellated wall and a baroque church stood guard over the city. Today, souvenir shops, stores, public baths and the homes of local residents have taken the place of the bloody battles. After a tour of the historic part of town, you can go to its beaches. They are considered some of the most beautiful in the country.

For years, Agadir has been a popular destination among surfers and beach lovers. Beautiful sandy beaches, sunny weather and an abundance of European establishments do the trick. The city’s resort areas are dotted with palm trees, wide boulevards, and luxury hotels. As the sun goes down, it’s pub time, where you can order English ale or German beer.

What to see about Morocco attractions

Morocco sights can be visited on their own, or you can take a guide. There are some interesting places in the country where it is easier to get by taking a tour.

It is an archaeological site that tells the story of the Roman conquest. The city became the southwesternmost Roman outpost in North Africa. Its presumed origins date back to the 3rd century B.C. Volubilis is listed as a World Heritage Site under the auspices of UNESCO. Here you can admire the Roman architecture and the preserved buildings: baths, temples, palaces, paved streets, an aqueduct, and unique mosaics. In the early twentieth century in Volubilis took place a large-scale archaeological research. The artefacts found during the excavations are preserved in the Archaeological Museum in Rabat.

Another interesting attraction in Morocco, which is located near Casablanca. Not far from the coast on a rock is a temple, which is revered by Muslims around the world. You can only get here at low tide. The rest of the time the shrine is cut off from the mainland by the sea. Only Muslims are allowed inside. Everyone else can see the temple surroundings and wander along the majestic white walls.

This is the largest and driest desert on the planet. There is no water, no animals or plants, and the sand dunes extend in an endless ridge to the horizon. It’s a mystical place that can change a person beyond recognition. The easiest way to get here is with a tour group from Marrakech. There are multi-day desert tours and one-day tours. But even if you do not have much time, it is worth choosing a tour with an overnight stay in the desert. You will not see such starry skies anywhere else.

The most beautiful places in Morocco attractions

There are many beautiful places in Morocco, from the majestic Atlas Mountains to the mighty sands of the Sahara.

Ouzoud Falls greet travelers with a loud roar and noise of water. Three streams of water rush down from a height of 110 meters. It is both majestic and beautiful. The path to the waterfall passes through an olive grove where you can take shelter from the scorching sun. On hot days, you can swim in the cool waters of Al Abid.

The majestic massif of the Atlas Mountains stretches across four countries in North Africa. The mountains are an integral part not only of Morocco’s landscape, but also of Berber culture. Among the mountain valleys are small villages where you can refresh yourself with mint tea and oriental sweets. There are dozens of hiking trails in the Atlas Mountains that you can take advantage of for scenic views. There is also the possibility of traveling on camels.

On the edge of the Sahara Desert lies the ancient city of Ait-Ben-Haddou. For centuries its strong fortress walls served as a safe harbor for traders on the caravan route. With the decline of trade in the region, the city began to become deserted. The inhabitants began to leave their earthen dwellings. The walls and towers of the city are recognizable by photos and newsreels. It was a popular place for filming movies. It was here filming scenes from the TV series “Clone”, films “Gladiator”, “The Mummy”, “Alexander”.

The best places about Morocco attractions

Morocco sights can be listed endlessly, but here the main thing is to see once than hear a hundred times. And to answer the question, “What to see in Morocco?” there are hundreds of options.

The most beautiful mosque in Morocco can be found in Marrakech. It was built in the 12th century by order of the local emir. The best architects worked on the creation of this architectural masterpiece. Minaret’s height is about 77 meters. Inside the minaret there is a wide stairway which one can easily get on the horseback. The mosque can accommodate up to 20,000 worshippers at a time, making it the largest in Africa.

It is a small town located on the coast of the Atlantic Ocean, only 75 km from Casablanca. It is ideal for discovering the life of the local population. The city grew up around a 15th century Portuguese fortress. Its strong fortifications ring the center of Azemur. Few tourists are seen here, which affects the price of local goods. Narrow streets, intricate urban labyrinths and a huge amount of beautiful graffiti await travelers. Beyond the city walls there is a river that used to be navigable and is now shallowed. The main tourist flow comes from surfers and kitesurfers, who catch waves with the wind on the beaches of Azemura.

It is a popular resort on the Atlantic coast. Both locals and tourists love to vacation here. The historic center of Ualidia is centered around the ruins of the citadel of the 17th century. But the main attraction awaits tourists in the cafes and restaurants of the city. Here they serve the tastiest oysters in all of Morocco. Just for the sake of gastronomic pleasure, it is worth coming here. The second reason to visit is the opportunity to admire the most beautiful pink flamingos. The resort is ideal for a quiet, relaxed vacation, with the opportunity to contemplate the beauty of nature. fore more information concact us.