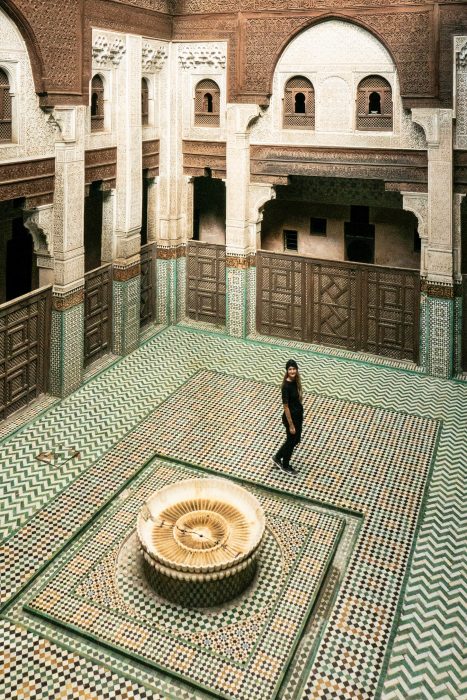 Meknes city is now considered an old provincial town, but you can still see clear traces of its former glory. Moreover, this town is considered by many as the “Versailles of Morocco” or “Little Paris”, while remaining an oasis of peace and quiet.

Meknes city, 60 km from Fez and 150 km from Rabat, is often overlooked by tourists. Those who decide to visit it, stay here only for one or two days. This is a big mistake because Meknes has an incredible amount to offer. The charm and atmosphere of this place will delight anyone who decides to stay here for a while. Walks through the city will help to understand and learn about the history of not only the former capital of Morocco, but also the entire country.

Images from the city’s history

Meknes city boasts a long and rich history. It is one of the four imperial cities of Morocco. The history of this place officially began in the early 10th century, when the Berber tribe of Meknassa came from the mountains of the Middle Atlas to the Sais plateau (Saïs).

The fertile soil and very good access to water made this area ideal for habitation. It should be noted, however, that the first fortified settlement was built here in the 8th century.

Development of the city occurred during the Almohad and Merynid dynasties (12th-15th centuries), who built a medina and impressive defensive walls, which are now the oldest in all of Morocco.

Meknes underwent rapid change after 1672, when Mulay Ismail established it as the country’s capital, which it remained until 1727. The most ruthless ruler in Moroccan history spared neither men nor money to expand and beautify his city.

A cruel legend has it that if Ismail was not satisfied with the work of the laborers, he would brutally kill them and have their blood mixed with cement for further construction. What’s more, some of the The material used for construction came from looting carried out in Volubilis and Marrakech.

One of the visionary ideas of this leader is an unfinished huge palace complex. A multitude of smaller palaces and palaces, libraries, hospitals, hospitals and mosques were also built on his orders.This site uses cookies. By staying on it, you agree to the use of cookies.Find out more – click here.Ok, I understand
As with Agadir, Meknes was also massively damaged by an earthquake. It occurred in 1755 and unfortunately it stopped the development of Meknes and completely deprived it of political importance.

Unfortunately, further fate of the city was equally unfavorable. At the beginning of the 20th century it was chosen as the main headquarters of the occupying French army, and because of that it became the scene of many bloody clashes between the Moroccans and the French.

Meknes returned to the favor of the government only after Morocco regained its independence in 1956. At that time, intensive reconstruction and modernization of the city began.

The Medina is the pride of Meknes city, honored by being listed as a UNESCO World Heritage Site in 1996. Its turbulent history has made it an original blend of architectural styles. The traditions of Arabic ornamentation are blended here with French elements into a harmonious whole.

The endless, fascinating maze of narrow streets, alleys and tiny squares can be strolled endlessly. Discovering their secrets draws tourists in completely.

Mansura Gate :To the west of the mellah, or Jewish quarter, is the center of the old city. It can be accessed through the Mansura Gate (Bab el-Mansour), which is a magnificent monument in its own right. The gate is named after its architect. The building was completed in 1732, five years after the death of Ismail, who commissioned its construction. The intricate mosaic decorations are stunning and make the huge gate seem like a delicate, openwork structure. Moreover, the gate is decorated with ancient columns from Volubilis.

Plac Lalla Aouda :After passing through the gates of the gate, we will stand in Lalla Aouda Square, formerly serving as a meshwar, or place of parades and review of the sultan’s troops. During the heyday of the capital, the Sultan’s Black Guard consisted of 16 thousand black slaves. The square was then part of the royal palace complex of Dar el-Kebir. Originally it consisted of 24 separate framed sections with gardens and mosques, unfortunately Mulay Ismail’s son decided to demolish most of them.

Ismail’s Tomb :Behind the representative pavilion of Kubbat el-Khiyatin is now the tomb of Ismail. Despite the bad fame of the ruler, this tomb attracts crowds of pilgrims from all over the country. They probably come to it not only because of the beauty of the place and the desire to pay their respects to the former ruler, but also – or especially – because of the barakah, or blessing. Annual mussems are held here at the end of the harvest (usually on the last Thursday of August). The festival is accompanied by singing, dancing and fairs and fancy dress. Tourists are allowed only to the temple as only Muslims are allowed to the tomb.

Great Mosque :In the heart of the medina stands the Grand Mosque. Unfortunately on February 19, 2010 the minaret, decorated with green mosaics, collapsed.

The likely cause of the disaster was the devastating effects of heavy rains. Forty-one people died and more than 80 were injured in the collapse of the minaret and part of the roof. By staying on it, you agree to the use of cookies.Find out more – click here.Ok, I understand
Sultan buildings

The grandeur of the Sultan’s buildings is also evidenced by the royal gardens, which are closed to the public, the massive granaries with an air conditioning system that was innovative for the time, and the stables for 12,000 horses (unfortunately, the stables are now in ruins).

Medresa :The jewel of the medina is called the Medresa Bu Inania, which was founded by Abou Hassan Marini (1331-1351). This Koranic school is considered a masterpiece of Arabic architectural art. Its walls are covered with majolica, which is ceramics with opaque lead-tin glaze with extremely rich colors. In addition, noteworthy are the stucco, arabesques and sculptures made in olive wood. Mulay Idris madrasa is also interesting, mainly because of the very unusual minaret in the shape of a cylinder.

Other attractions :Interesting masterpieces can be admired in the museum Dar Jamaï, which houses, among other things, a collection of Berber kilims and ceramics, and after a busy tour, you can relax for a while in the Andalusian garden-museum.

Every year at the marabout of Sidi ben Aissy, on the day before Mohammed’s birthday, takes place one of the largest mussem in Morocco. Unfortunately, tourists who do not profess Islam are not allowed to enter the tomb.

New town :The new part of the city, the ville nouvelle, was built during the French protectorate on the opposite side of the Bu Fekran River. It is an orderly district with countless elegant villas and modern estates. Amidst the tropical greenery rise banks, expensive stores, exclusive restaurants and cafes. The French-style cafes attract visitors from afar with the scent of cardamom and cinnamon, which is added to the coffee served in large cups, called qahwa bil-halib. Coffee is best accompanied by almond croissants or exotic mango sorbet.

Olives and wine :Meknes city is famous not only for its monuments, but also for its olives and wine. The surrounding hills are an ideal place for the growth of these vines. The industry was started by the French, of course, but is still being successfully developed by Moroccan growers. To buy local wine, the best place to go shopping is the ville nouvelle.

Some of the most recommended red wines include: Les Coteaux de l’Atlas, Beni M’Tir Larroque Cabernet Sauvignon and Comtesse de Lacourtabalise. On the other hand, from white wines it is worth choosing: Beauvallon Chardonny and Medaillon Cabernet Sauvignon. Although these wines are not among the cheapest, they are worth tasting. After all, Morocco is an Islamic country and if only for this reason, the existence of local wineries is unusual.

Suki or fair :Of course in Meknes city, as in other Moroccan cities there are many souks. At the western gate of Bab Berrima there is a jewelry market, at the palace of Dar Jamai you can buy beautiful carpets, walking north from it you come to the spice and nut market. These are just examples of what the local traders have to offer.