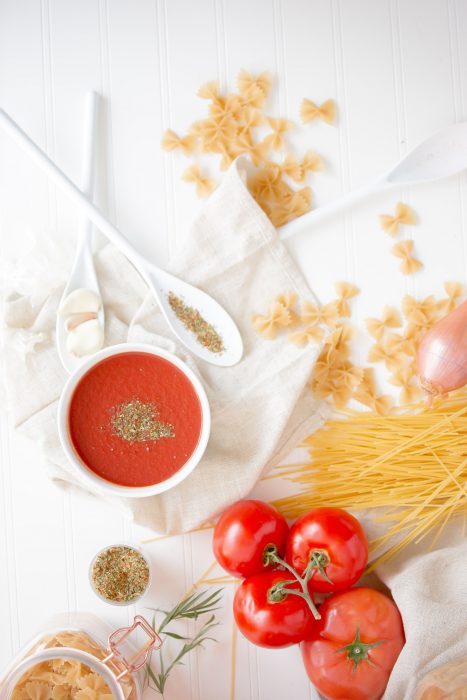 Matbokha is spicy Moroccan vegetable sauce whose main ingredients are peppers and tomatoes. It is now considered the national sauce of Israel. Texture – paste-like, structure – heterogeneous, there are pieces of vegetables; color – red, orange; taste – spicy and sharp; flavor – peppery, sweet. The name “matbukha” is also used to refer to vegetable stew.

How is matbukha sauce made?

There is no single recipe for the seasoning. Every family and every cook has his or her own way of making matbouhi. While absolutely all compositions have fleshy tomatoes, the types of peppers vary. You can take the sweet Bulgarian types or the juicy, California types, add paprika or chili.

The sauce must have originally had a very spicy taste. The purpose of the condiments, whose formulation was developed in the era of no refrigerators, was to prevent spoilage and suppress pathogenic flora if it had already infiltrated the dish. At a later stage, when the possibility of long storage appeared, they began to experiment with the taste of matbouh sauce, making it sweeter or spicier.

Matbucha sauce is made by small private companies. Production lines are equipped with devices for cutting and washing vegetables, agitators, vacuum chambers for heat treatment and devices for packaging. The food is packaged in 250 ml. flat cans made of food plastic. Ingredients a minimum: 2 types of peppers – sweet and chili, tomatoes, tomato paste, sugar and salt. The label indicates the types of preservatives and stabilizers. The texture is pasty and completely homogeneous.

It is very difficult to buy matbucha in supermarkets outside of Israel. Special demand for the spice is not popular. But private suppliers take orders over the Internet. Whether it is worth the risk and order the product, not knowing how it was stored, everyone decides for himself.

More recently, I became fascinated by Israeli cuisine, being a fan of this country and the people who have built a prosperous state in the desert over several decades. In Israel, everything blooms. Girls’ cheeks, citrus plantations, greenhouses with vegetables. You take a leaf of local green lettuce in your hand, take a bite, and the juice flows. Carrots – they’re red, orange, purple. Eggplant – it’s white, spotted, dark purple. Mama dear! And olive oil? It’s not bitter, and if it’s supposed to be bitter, it’s delicate. You want to dip a crust of freshly baked bread, salt it a little, and eat it. When I told my friends about this gastronomic paradise and said the names: matbukha, shakshuka, babaganush, tkhina, everyone nodded intelligently and went to make pasta. I had a burning desire to expand their culinary horizons, so I started experimenting.

Equipment and other supplies:

I want to pay attention to the spices. I always repeat Grammy’s words: “A chicken should be a chicken, not a ballerina on a diet before a premiere. The same goes for spices. They should have both smell and taste. Paprika has a faint odor, six months after grinding, even if properly stored, it runs out and is already just red powder. No problem. No one cancels Halloween, you can paint your face and become a Native American leader. But you have to cook with a fresh spice that has a spicy flavor. You’ll know the flavor of zira right away. It is bright, nutty. In appearance, the seeds of the zira resemble the seeds of cumin or dill. Feel free to smell them!

I can honestly say that if you don’t know what Jewish patience is, you do have a chance. Serve it with fresh bread, use it as a sauce to your favorite pasta, with lamb matbucha is your best friend, and with eggs as shakshuka – the most welcome relative with a dowry.

Matbukhas can be made larger and stored in glass jars with a lid. You can make a twist for the winter. If you are against spicy, do not add chili peppers. It’s not the classic version, but you don’t have to worry about your stomach.

If the weather outside was disgusting, Granny would look up at the sky and say: “Imagine the clouds floating across the sky, like a porcelain Madonna set. Birds flying and resembling teapots in a glass of delicious freshly brewed Indian tea “Three Elephants”. Then, though sad on the soul, it will be a little brighter. I sighed and went to make some delicious tea to distract me from unnecessary thoughts.

Choose your eggplants very carefully. You have to make friends with each one and exchange a long handshake. Which means take an eggplant in your hand. The vegetable should be firm, smooth and without blemishes. If you see a dimple on the nose of the eggplant, it is a “girl”, and if there is no dimple, it is a “boy”. In this case, the male gender suits us better, because “girls” have more seeds, in this recipe they are “not allo”.

Composition and calories of matbouha sauce

The vitamin and mineral composition of the sauce depends on the recipe, proportions and type of ingredients. Nutritional value is low. The seasoning, prepared by stewing in tomato juice, has a caloric value of 60 kcal per 100 g.

The caloric value of matbouha with vegetable oil is 79 kcal per 100 g, of which:

Vitamins predominant in the seasoning: ascorbic acid, choline, lycopene, nicotinic acid, beta-carotene. The mineral composition of matbukha has a large amount of sodium, potassium, phosphorus, magnesium, silicon, iron, zinc, manganese. Despite the fact that the product is not related to the sea, it has a small amount of iodine – at the expense of sweet peppers. Indispensable amino acids 12 species with a predominance of leucine, substitutable – 8, most of all glutamic and asparagic acid. And the sauce also contains organic acids (malic acid, citric acid), pectins, tannins.

The spicy seasoning activates digestive processes and increases the rate of peristalsis. Salt, which is used in the preparation, helps to retain precious moisture and maintain water-electrolyte balance, which is very important in those regions where the recipe for the sauce was created.

The benefits of matbukha for the body:

Women who regularly added matbukha to their daily menu noted that PMS began to bother them less often and their menstrual cycle normalized. For men, the products that make up the sauce – hot peppers and tomatoes – are aphrodisiacs. The arousing effect increases sexual desire and stimulates the production of seminal fluid.

It is worth to note the antioxidant effect of matbouha due to lycopene – a substance that is contained in tomatoes and does not disintegrate during heat treatment. It accelerates the removal of free radicals circulating in the intestinal lumen and circulatory system, suppresses malignization and reduces the risk of developing intestinal cancer of all parts and breast cancer.

Contraindications and harms of matbukha

It is worth avoiding abuse of the sauce in diseases of the gastrointestinal tract associated with increased gastric acidity. Consumption of matbukha will harm the ulcerated mucosa of the mouth, digestive tract and stomach. You will have to refuse to enter the diet in case of exacerbation of chronic pancreatitis, ulcer disease, enterocolitis.

It is not worth tasting daily seasoning for gout, arthritis and osteochondrosis during frequent attacks because of the high content of oxalic acid. For the same reason, limit the tasty additive to dishes with urolithiasis or cystitis.

The property of increasing the tone of the body is dangerous for people prone to hypertension. Bitter pepper, which is necessarily introduced as one of the main components, increases the load on the gastrointestinal tract and cardiovascular system.

Red products are dangerous for people who often have allergy attacks. When familiarizing yourself with a new flavor, keep in mind that the main ingredients in the sauce – tomatoes and 2 types of peppers – are red.

Recipes for dishes with matbukha

The spice is considered a universal, served with it fish and meat dishes, pasta, used as an ingredient for pizza and sandwiches. But there is one dish that cannot be cooked without matbucha: shakshuka eggs. The pepper and tomato sauce is brought to a boil in a thick-walled frying pan and eggs are beaten into it, covered with a lid and waited for the contents to set. Quick, tasty and healthy.

Stew. In a thick-walled frying pan, fry rings of onion. When they become soft, put finely chopped young veal and wait, stirring constantly, until there is a ruddy crust. Pour the tomato and pepper seasoning, add water and stew for 40 minutes until the liquid evaporates and the meat is tender and soft.
Fried fish. 1 kg of fresh herring is cleaned, remove large bones (it is desirable to get rid of small bones as well), cut into portions. Mix flour with salt and roll the fish in it. Pour sunflower refined oil in a pan, about a finger, fry the billets until a crispy crust, like in a deep fryer, put in a form on a “pillow” of red onions – cut in rings. Pour tomato-pepper sauce on top, bake at 160-170°С for 15 minutes. This time is enough for herring to be completely cooked. You can make the dish in a pot, then put it on the fire, pour 250 ml of water and stew for 15 minutes. Before serving, each piece is sprinkled with fresh herbs – chopped parsley and dill.

The seasoning is relatively young – the development of recipes is estimated at the 18th century. It was during this time period that tomatoes ceased to be exotic to the peoples of the Middle East. At the same time, the recipe for matbucha was brought to Israel by Jewish immigrants. It made its way into the diet, as the list of ingredients did not contradict the traditions of kashrut, and the taste was moderately spicy and moderately spicy. In addition, in the days when refrigerators were only in development, pepper spice reduced the microbiological hazards of dishes, because in the heat quickly reproduce pathogens.

Housewives of countries with hot climates love matbouha sauce for the fact that it does not require much time for preparation. After all, it is enough to cut the ingredients into arbitrary pieces, pour them into a pot and cook over low heat, minding your own business, periodically visiting the kitchen to mix everything. And the cooked vegetables are grinded to a smooth consistency, and that’s it – dinner is practically ready. So why not master such an easy recipe and make your pets happy, too?