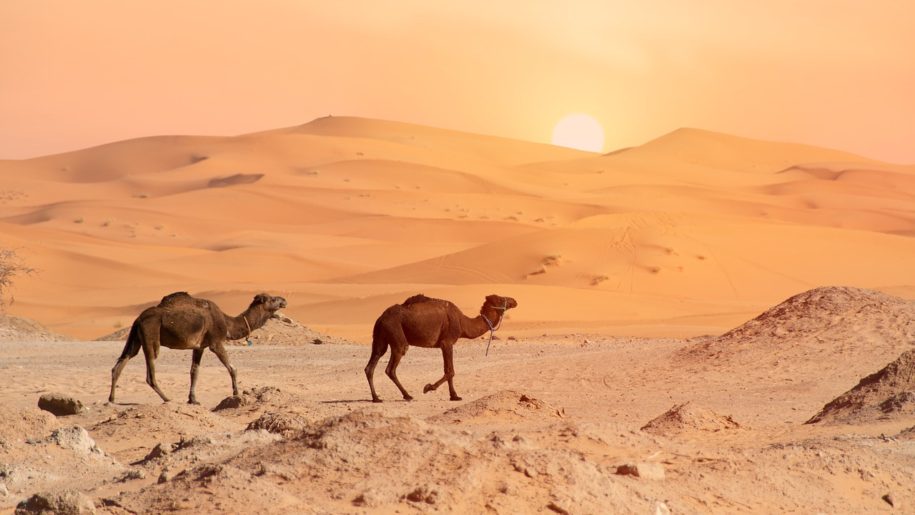 The Kingdom of Morocco is a country located in northwest Africa. It has at least 40 ecosystems with an impressive variety of fauna. Even in regions with the harshest climatic conditions, different species of animals and birds can be found. In total, there are more than a hundred species of mammals and no less than two hundred species of birds. Below are the main Moroccan animals with photos and descriptions.

It’s debatable whether or not camels exist in Morocco. This is due to the fact that conventional camels have two humps on their backs, whereas Moroccan camels only have one. Dromedaries, a member of the camel family, are the name given to camels in Morocco. Dromedary camels (Camelus dromedaries) are uncommon in the wild, and the majority of those observed strolling across the landscape have owners. Herds that haven’t been fully domesticated can often be spotted, but they’ll still follow their nomadic owners from one feeding area to the next.
Dromedaries have a reputation for being belligerent and obstinate, however, this is only true when it comes to the herd’s leader. If they believe the herd is threatened or in danger, they will become violent. Most of the time, these are gentle creatures with a high level of intelligence and patience. These camels are native to northern Africa, but Australia is home to the world’s only really wild Dromedary Camel population. They shield their eyes and ears from the sand with long, thick eyelashes and very hairy ears. Camels reach a height of six to seven feet when fully grown, and their lifespan ranges from twenty-five to fifty years.
The Dromedaries are revered by the owners and the people for their gentle natures and ability to survive in the desert with very little food and water. Their incredible ability to increase their own body heat allows them to live in the desert heat.
Morocco’s allure is linked to the images and culture of camel caravans and their owners journeying over the desert. Despite the fact that camels are not utilized as a mode of transportation in Morocco, they have become an important part of the tourism industry and a source of revenue for many residents. Visitors may go on a camel journey in Morocco and stop off at some of the country’s most unique locations along the way.
Traveling on a camel through Morocco under clear blue skies and through huge landscapes of magnificent beauty is a once-in-a-lifetime opportunity. Discovering off-the-beaten-path little villages and settlements while being safely carried across the harsh desert on one of the desert’s most amazing creatures is a unique experience that will leave tourists with stunning memories and a deep appreciation for the Dromedary Camel.

This miniature mammal of the African hedgehog family is not found only in Morocco. The Algerian urchin is also found in Algeria, Libya, Tunisia, France, and Spain. In Morocco, these small animals are found mainly in mixed forest climates. They do not inhabit arid areas.
Externally, the Algerian urchin is very similar to its European counterpart but much smaller in size. Its body length is only 20-25 cm. The Algerian hedgehog is also distinguished by its large ears. The head and paws of this small animal are brown, while the muzzle is pale.

Moroccan animals are the only macaque found outside of Asia. The maggot has many different names. This representative of real monkeys is known as the Maghreb or tailless macaque. It is also known as the Barbary monkey.
The body length of females reaches 55 cm, and of males – 63-64 cm. Males are also larger in weight. While females weigh only 9.5-10 kg, males can weigh up to 14-15 kg. The tail of these monkeys is small. Its length varies from 38 mm to 2.2 cm.

Berber monkeys in Morocco are found in many places: in meadows, among rocks, in forests. They feed mainly on insects and various plant parts.

Moroccan animals the mongoose family is also known as the “pharaoh rat. According to Herodotus, the ancient Egyptians worshipped this animal as a sacred creature. The body of the Egyptian mongoose was embalmed and buried with the pharaohs.
The Egyptian mongoose is a typical animal of Egypt. It is also found in the vast expanses of Morocco, where it lives on the banks of rivers and in the thickets of reeds surrounding fields. This animal can also be found in forests and savannahs, but only where there is a water source nearby.

Moroccan animals is the most famous representative of porcupines. Its body length reaches 60-83 cm and its weight ranges from 13 to 27 kg. The entire body of the crested porcupine is covered with characteristic sharp bristles.
In addition to them, this animal has stronger needles, which are up to 35 cm long. It is this that the porcupine spreads in the form of a crest for protection against enemies. This terrestrial animal feeds exclusively on vegetation, including leaves, roots, and bulbs. Occasionally, its diet may include carrion and insects.

This cloven-hoofed mammal, a subspecies of the wild sheep, is widely distributed in the expanses of North Africa. Its body is covered with short wool of a reddish hue with dark stripes.
Males have horns, while females may sometimes lack them. Adult mushroom rams can have horns up to 80 cm long. The average weight of males reaches 50 kg, while females only 34-35 kg.

Females are capable of reproducing offspring in their 3rd-4th year of life. Due to uncontrolled hunting and poaching, the population of these animals in Morocco is on the verge of extinction.

These reptiles are usually found in urban areas. They can often be spotted on tree trunks, in crevices of rocks and houses, and on ruins. These small reptiles feed mainly on insects.

The body length of the wall gecko reaches 15-18 cm, with the tail accounting for almost half of it. This reptile is nocturnal. Its brownish or brownish-gray coloration is lighter during the day and darker at night. The body has a characteristic, clearly visible transverse pattern.

This member of the feline family looks very similar to a domestic cat. Its body height ranges from 23-36 cm, and its weight ranges from 1.5 to 3.4 kg. The tail length reaches 23-30 cm. The most recognizable appearance of the barchan cat is given by its flat wide head and short paws.
These animals are found in Morocco in the desert expanses, where there are almost no rocks. The barkhan cat is well adapted to life in the desert. It can live for months without moisture and survive for a long time without food due to accumulated fat.

Externally, this rodent is very similar to ground squirrels. Its Latin species name is precisely translated as “ground squirrel of the Atlas Mountains”. From this, the distribution range of these Moroccan animals becomes clear.

The Maghreb squirrel is a small rodent. Its body length varies between 16-22 cm. The fluffy tail of this ground squirrel is the same length. On average, these rodents weigh about 340 grams.

Their fur is dyed reddish-brown or grayish-brown. The Maghreb Squirrel has white stripes on the sides of its body and sometimes along its backbone.

Maghreb Squirrels live in groups in burrows dug among rocks, in meadows, or in farmland. They feed mainly on seeds and fruits.

This species of crested rodent is found mainly in southeastern Morocco, but also in Tunisia, Libya, and Algeria. In the Moroccan expanses, the gundi inhabits mainly the southern slope of the Atlas Mountains, at altitudes from 230 to 2900 m. Rocky desert regions are the main places where these small rodents are found.
The gundi reaches a body length of 16-20 cm and a short tail of just under 2.5 cm. The average weight of these animals is about 185 grams.

Externally, the gundi looks very similar to the guinea pig. These are diurnal herbivorous Moroccan animals. They make their home under boulders and in rock crevices. They live in groups of 3 to 11 individuals.

The most recognizable appearance of the Phenek is given by its rather large ears, which are 10-15 cm long against the background of its small body. The fur of these animals is colored in a creamy-sandy shade, which allows them to reflect heat during the day.

Fenek is an omnivore. Its diet includes rodents, rabbits, birds, and eggs. Like many desert fauna representatives, these miniature chanterelles can do without water for quite a long time.