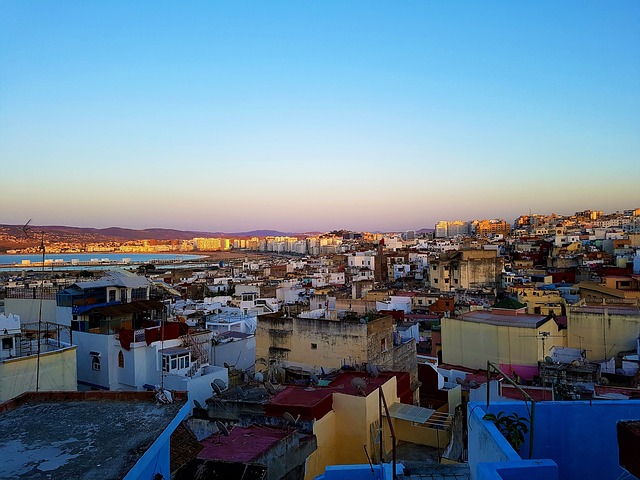 PR-manager from Minsk Andrei Sidorov spent almost a month in Morocco, visited many cities like Tangier city, came down from the north to the south – and now generously shares with us his observations, tips and best practices. Andrei went there having fallen in love with the atmosphere of the movie “Only Lovers Survive” – and if you also like it, this series of materials is just made for you.

The Moroccan city of Tangier opens Africa to Europe. For half of the last century, the city was ruled by three or six European countries at the same time, which means that it was not controlled by anyone. Apart from the disparate colonial cultural influences, this meant maximum freedom in an Arab setting. Tangier became the center of attraction for European musicians, smugglers, spies, writers, diplomats, travelers, artists, entrepreneurs, and con artists. The Rolling Stones lived here, Burroughs died of drugs, Henri Matisse painted here. After the departure of the Europeans, the city fell silent, but remained steeped in a fermented atmosphere of creative pursuits. This made Tangier the hero of Jarmusch’s film Only Lovers Left Alive, after which you definitely want to get lost in the local locales.

Tangier reveals itself in a very arbitrary way. Living stories of the city over mint tea are told by random interlocutors or old European hippies who have not stopped coming back here since the 70s. At first the city seemed to me a peculiar but boring and dirty provincial marketplace. Then I didn’t notice how I stayed there for a week instead of three days, and later, in the south, I spent hours discussing the atmosphere of the city with other travelers and Moroccans.

Belarusians and Ukrainians need a visa to visit Morocco. And the citizens of Belarus can apply for it exclusively through the Moroccan Embassy in Moscow. The set of documents is the same as for the Schengen visa, the cost – € 30. Minsk agencies do everything for about the same amount on top: I gave them just a passport and money. It takes about a week.

Today there is a ferry to Tangier city from the Spanish Tarifa. The cost of the ticket without a car/motorcycle is € 40. The passenger part of the ferry is something between a good train car and an airport lounge. Passport control, Duty Free and snack bars are all on board. The voyage takes just over an hour. This is the only flight that arrives at the city port. Knowing the direction, you can walk from the ferry ramp to the center of the medina (the historical part – note 34travel) in 10 minutes. The modern part of the city grows along the beach.

Alternative sea routes are from Algeciras and Gibraltar, but they lead to the port of Tanger-Med, 45 km from the city.

It is easier and more boring to get to Tangier by plane – Ryanair flies there. The airport is a 30-minute drive from the center. There are connections to the main European hubs: for example, on a flight from Brussels-Charleroi you can catch tickets for € 30-40.

If you are already in Morocco, there are comfortable trains to Tangier from all major cities in the country.

Moroccan cities, with some exceptions and regional features, are clearly and vividly divided into two completely different parts – new and old. Which, in fact, applies to all life in the country. Only the thousands of cafes with mint tea and strong coffee (which is usually the entire menu) remain unchanged anywhere.

The old city is probably exactly what you imagine when it comes to the Arab country. Endless streets-markets, kasbahs (fortresses), labyrinths of alleys, walking mosques, muezzin calls filling every corner, street-food fryers, loaded donkeys, riads, and colonial echoes. Chances are your hotel or hostel will be located there.

If, however, you want understandable tourist sites and entertaining guided tours, it’s not about Tangier. For a strong Moroccan color “as in the TV series “Clone” is better to go further south. Here the trade is quieter, there are no donkeys, market pestering and unsolicited escorts are not very much. There are no old palaces, large lush gardens and massive fortress walls, as in the imperial cities of the country. There are no “Towers of Pisa” at all.

To get to the medina of Tangier city, you just need to walk up from the port, beach or the central avenues of the city. On the way to it right on the streets scattered markets of vegetables, crockery and just stuff. Medina is crowned by the Kasbah – a separate quarter of the city – the most interesting for the tourist, yet clean and uncluttered.

You begin to understand the city in one of the endless gloomy coffee shops. Most likely, the waiter will be an older man in a strict uniform. He works in a preppy manner, as if he were serving not me in dusty sneakers but a monsieur colonist in a white hat. At the same time, it is unhurried and relaxed, like everything else in this country. From authentic dishes he routinely pours you milk in your coffee or tea in a cup – in time it will become a common, but terribly colorful daily ritual. Almost all coffee shops are full of a variety of smoke, and your table neighbor can share his pipe with you, whatever’s in it.

People around here speak a mixture of French, local Arabic and Spanish. Most will sustain a conversation in English as well. Portuguese and Italian are not uncommon either. Tourists are few, vagrants of all kinds are plentiful. I’m sure everyone will discover the city from different angles, but there are a few places to start your immersion in Tangier from.

Place du 9 Avril 1947 is the point from which to start the promenade around Tangier city. From here, the streets diverge into every quarter of the city and the entrance to the markets of the medina begins.

The old Cinema Rif not only works as intended, but also plays the role of an art space, a trendy coffee shop, and a place of attraction for progressive youth. The big guy behind the counter will tell you about all the events going on in town, so don’t be afraid to ask.

Jarmusch’s set – near the museum at the very top of the Kasbah you can find that same walk-through courtyard from Only Lovers Left Alive. As soon as I sat down on the bench from the poster, old man Abdulah appeared next to me with a bunch of stories about Tilda Swinton. Well, and about James Bond, who was also filmed here. But that’s what every other local kid is talking about.

Rolling Stones Music School – According to a legend I heard, the music school here was opened by the Rolling Stones while they were living in town and were inspired by the Moroccan mandolins. They say their house still has its own atmosphere, but I lost my guide on the way there, and with him the chances of finding the right building.

Thanks to its location on the European-African border and its free economic zones, Tangier city is rapidly growing and becoming rich. The new city is full of Spanish and French company offices, casinos, restaurants, and clubs. Unlike Fez and Marrakech, here the new city begins to grow right out of the old markets and flows seamlessly into modern avenues with business life and other trappings of a European place.

In general, local establishments do not differ much from European ones. But you have to be prepared that alcohol will be more expensive, and the atmosphere in some bars and clubs makes you nostalgic for our 90s.

A nice bonus for boozing is the cheap Tangier cabs. Turquoise Renaults are safe to hail off the side. Two dollars is the red price for most routes. That’s pretty much the same for all of Morocco.

To travel between cities, locals use Grand Taxi. This is a separate ride – one old Mercedes benz passenger car is loaded with a driver and five passengers. And that’s not the limit. One of them is forced to ride as a gearshift. But you can get to the nearest suburbs for a relatively small amount of money. For longer distances I still advise to look for an alternative in the form of buses, trains (to major cities) and hitchhiking.

Near Tangier (formally within the city limits) you can find the Hercules Caves. Meeting the sunset there is a must do according to the tourist guides. It is really a beautiful spectacle, but if you are short of time, you should not come here to watch the sunset.

Around the caves are the first African beaches of the Atlantic Ocean. The beaches are clean and not crowded, so you can spend a day on them. True, it’s better to know the temperature of the water in advance – it can be too refreshing in the ocean.

Between the city and the caves is Cape Spartel, which cuts through the Atlantic Ocean and the Strait of Gibraltar. The lighthouse, the cape, the ocean – the cards come out as cinematically as possible.

OTHER CITIES IN THE NORTH

The buses and Grand Taxi go from Gare Routière de Tangier city to Chavin (Chefchaouen), and you have to be there. It is exactly as it is painted in the tourist brochures. All the houses are painted in hundreds of shades of blue and azure. And this is not an attraction for foreigners – these are homes, they live simple Moroccans with their simple affairs, as if they have not changed since the move from Andalusia.

The eyes go crazy in these white and blue mazes. And when you get out of them, you find yourself in an expanse of green mountains. If you’ve played Heroes 3, you’ll recognize the cliffs here from the elven castle. On the outskirts of the city, springs and creeks run, and there’s a system of toy canals. Fruit is cooled in them, and stone laundry pavilions are built (some are still used for their intended purpose), next to which people escape the heat. One creek over a stone bridge flows over another, enters a third – and adults stagger in all this splash happy as children. And there is also a delicious goat cheese here. There are really a lot of tourists, so it’s better to come to Chavin on a weekday. From the nightlife there is only one bar near the hotel Parador.

The other interesting cities of Asila and Larache are 50 and 80 kilometers from Tangier respectively. You can spend a day or two in their streets and neighborhoods in search of pirate coves, Roman-Phoenician-Carthage ruins and ornate Arab facades. Compared to Chavin, white predominates here. Buses and cabs leave from the same Tangier city bus station.

And one last thing: Tetouan. According to some accounts, until recently it was a city of smugglers and full of shady characters. Today, a small number of tourists – mostly Spanish – choose the city for its relative, by Moroccan standards, quiet, mountains, prices and proximity to the Mediterranean beaches. From here it is also convenient to make outings throughout the Moroccan north.